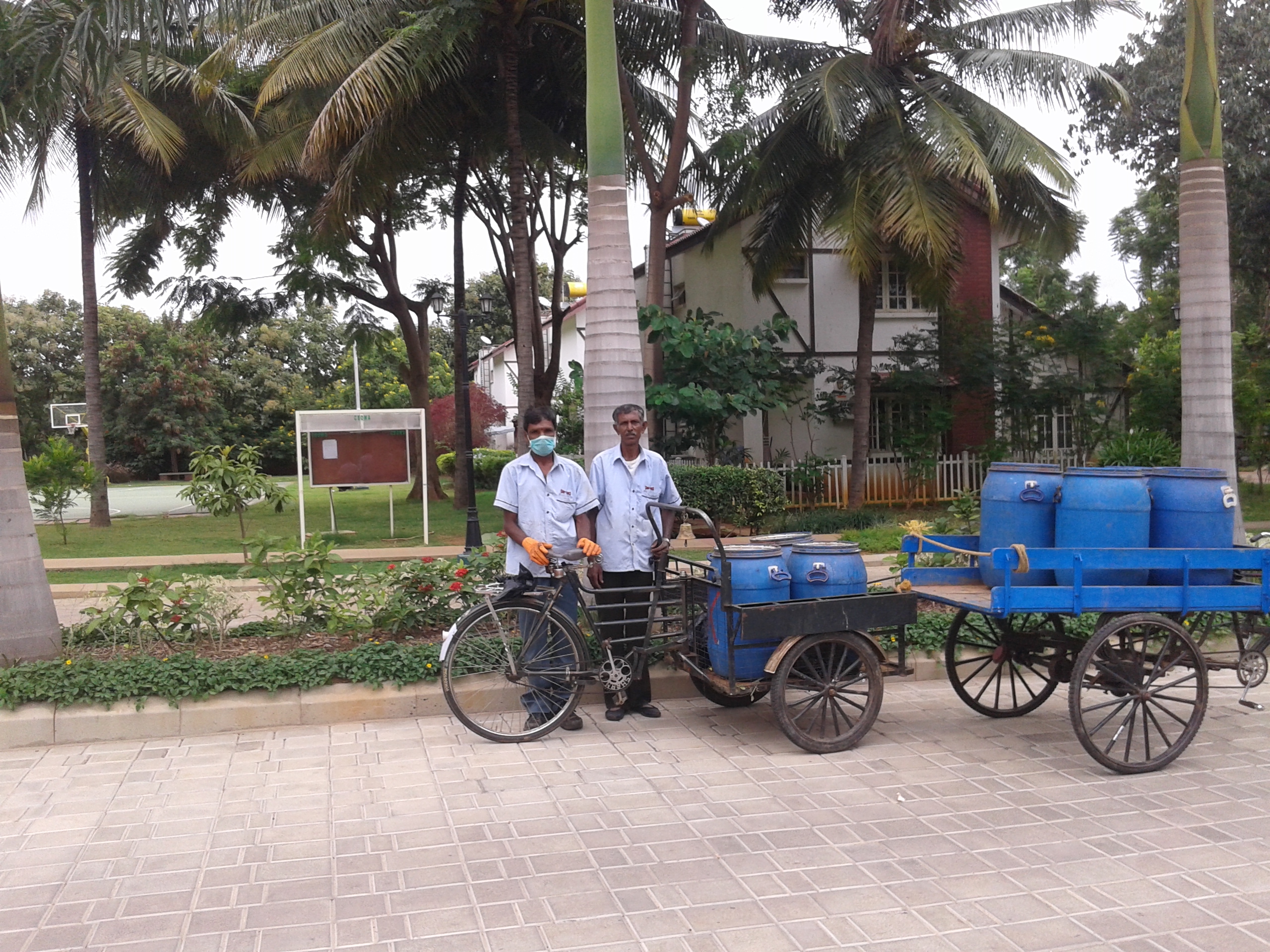 Chaithanya Samarpan, a gated community of 203 homes had been toiling with waste management initiatives for at least 4 to 5 years. For various reasons, it lost steam and we were back to square one, which was sending all the waste un-segregated to landfills.  The garden waste was taken out in tractors, which was dumped in nearby open areas and burnt.

In 2012, we made an attempt. We had shortlisted Waste Wise Trust as our waste management provider and requested them to give training to all the maids. The logistical issues resulted in not very successful propagation of information. Also the management committee was pre-occupied with other higher priority tasks. This resulted in relegation of this waste management initiative to back burner. Fortunately in Aug/2013 management committee approved procuring of garden waste shredder to process the garden waste. The thought process was to use the shredded output as mulch for our garden area.

In Sep-2013 we again started seriously looking to state of the waste management.

All these discussions helped us in deciding to go with segregation at source and door to door collection of segregated waste.

Our initial thought process was to ape Prestige Ozone for back end processing and tailor them to our needs. Prestige Ozone and Samarpan are similar in both being gated communities with large spread of the homes. The decisions made were for the following.

We decided to do the back end processing in phases.

We decided against setting up a single event where all residents/maids are invited. We thought there will be logistical issues trying to get maximum coverage.  We were fortunate that we were able to recruit significant number of volunteers. We decided to assign few manageable block of homes for each volunteer who will take care of educating the residents in those homes on segregation basics.

The following material was given to residents.

1. We prepared a handout which details the classes of segregation, days of pickup, contact details etc.  This handout was printed in a glossy paper, put in a plastic sleeve. We decided against lamination of the handout.  In case we need to modify, we just need to take a print out and put back in the sleeve.

2. Three colour coded stickers with images which help maids understand which waste goes to which bins was also given. These stickers were supposed to be put on bins, which residents leave outside their homes.

The volunteers panned out over a week in January 2014 and distributed the handouts to residents. They took time to educate the residents and maids on dos and don’ts of segregation.  This initiative was received well from residents.

The door to door collection started on 1/Feb/2014.  We were fortunate in largely compliant residents. The collected waste was still taken out by BBMP trucks.  This process went on for about a month with no big issues.

During the visit to our place, Sangeeta and Ritu had mentioned about Byobins being used by Waterville for food waste composting.  Ambika Sen of Waterville gave us excellent information on the Byobin usage, tips etc. We also talked with multiple other composting solution providers like Rite-ways, Tall-Boy along with Byobin.  After study of various solutions in place, we decided to choose Byobin for our needs. Unfortunately our association was going through a financial crunch. So funding the composting solution was given a lower priority, resulting in shelving of this project.

Meanwhile we had planned on shredding the entire garden waste output and using in our gardens. But we grossly underestimated the amount of time required for shredding. This resulted in huge pile up of garden waste collected.  We decided to re-start sending the garden waste outside again in tractors. But the labour required to clear the mountain of waste collected was prohibitively costly.  In Apr/2014 Mr Rosario of waste wise trust saw our huge pile up of garden waste.  Discussion with him resulted in our decision to try windrow method of composting of garden waste. We hired a JCB to make neat pile of the accumulated garden waste. Fortunately we had enough open space to setup this pile.  We were supposed to water this pile regularly to speed up composting. We were able to get this done in Apr/2014.   While talking with few of the composting solution providers, we came up with a low cost containment structure using chicken mesh structure for holding the generated garden waste. This has been put in place now. In Aug/2014 we poked in to the windrow piles and were happy to find that piled up garden waste has been composted enough for using.  With no efforts from our side, in 4 months we were rewarded with compost being ready. We setup a sieve to sieve the pile. The partially composted left over leaves were applied to bushes as manure. The sieved compost was to be applied to lawns as manure. The sieving is very time consuming. So we are going to try shredding the contents of the pile and then sieve. Since waste has reduced in volume during composting, the time take for shredding should be manageable.

Meanwhile residents noticed that BBMP truck was mixing up the waste while carrying out the segregated waste. So the compliance started falling down drastically.  We were in danger of efforts put in by our volunteers going waste yet again.  So we thought of engaging Waste wise trust to responsibly dispose of our collected waste. Waste wise trust assured us that they will compost the food waste at their premises, with dry waste being recycled using rag pickers.  We got permission from management committee for this switch. We appointed waste wise trust for responsible disposal from July 2014.

In parallel, one of our volunteers took pains to find a mechanism to fund in-campus wet waste composting. Management committee approved the proposal of this being funded by residents directly as part of monthly maintenance charges.  We passed a resolution in one of our general body meeting for approving the same. We wanted to do a pilot project of the wet waste composting to help us in understanding the issues which might be peculiar to our case and later expand to full scale composting after proof of concept.  We came to know that Balaji Pristine had two un-used byobins.  We procured them for 50% of the cost and have started composting a portion of the food waste collected from Aug 1st week.  The remaining portion is being taken out by Waste Wise Trust for composting at their site.

We had to put in efforts to bring back the compliance in segregation which fell down drastically when residents noticed BBMP trucks mixing up the segregated waste. We had to send out remainder emails, sent out letters to non-compliance homes, talked to them personally.  We were fortunate that when we talked with residents and let them know that we are doing responsible disposal of waste, resident’s readily obliged to abide by the segregation rules.

What made it work:

To know more write to the author Suresh Ramasamy (suresh_r343@yahoo.com)