Back To Home
Uncategorized 16 December 2014 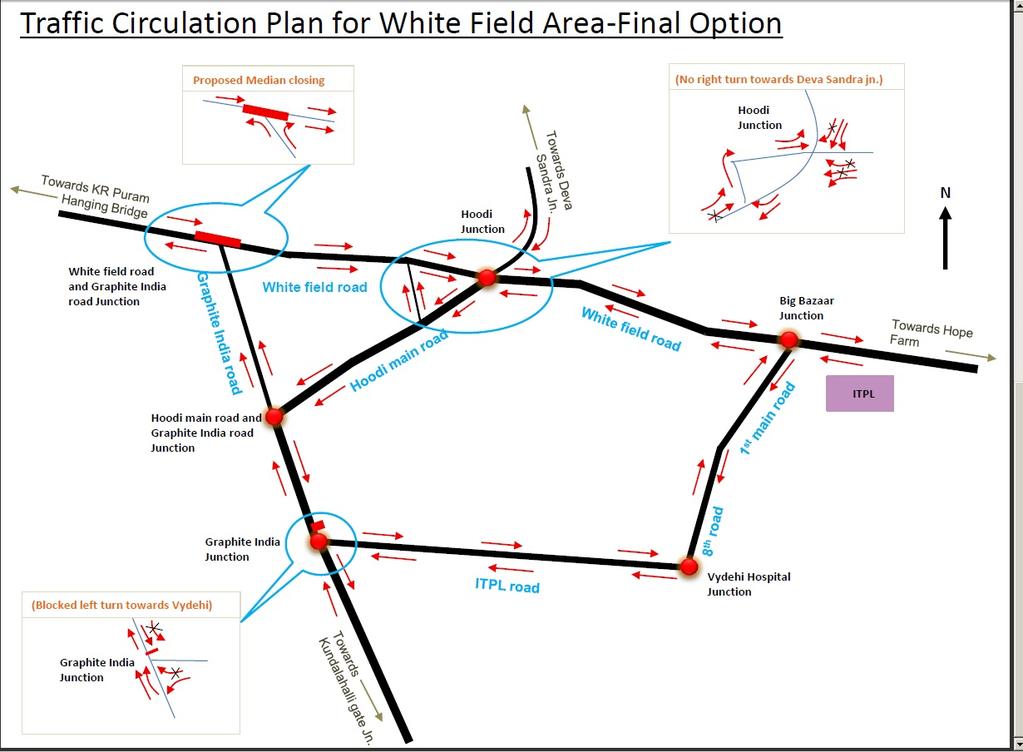 Whitefield’s traffic is a Mess. What are the top things that will make a “sustainable” impact to us all? What is the Mobility Vision?

How to coherently gel together these ideas, how to convince elected officials and civil servants to release funds, how to mobilize support, and perhaps most importantly, how to execute in an non-corrupt and efficient manner. We grapple with these questions, but I have no doubt in my mind that we’re within grasp of the answers.

What projects are you working on

What is the “essence” of the recent Traffic plan implementations at ITPL/Hoodi area?

The essence of the traffic plan is to give maximum priority to the direction of maximum traffic flow. It is observed that the amount of traffic travelling in a rush-hour direction dwarfs the opposing traffic by a factor of 10-to-1 or even 100-to-1. For example, during morning rush hour at Graphite India, the Northbound Cosmos Mall-to-SAP labs traffic vastly outnumbers the Southbound Keys Hotel-to-RxDx Telerad traffic. Thus a single Southbound vehicle that holds up the junction can cause an order-of-magnitude number of Northbound vehicles to stall.

Giving maximum priority to the direction of max flow is the same principle that is used when right-turns are banned at T-junctions causing right-turn-traffic to use a U-turn-followed-by-left-turn.

The price of the plan is that lower-intensity traffic flows will need to suffer a U-turn. And if the U-turn does not have a weaving lane (always the case in Bangalore), a jam may well be created there. We see this effect at the Ginger U-Turn and at the Hanuman Temple U-turn.

So this is a work in progress. The police planners are monitoring the situation, continuously update the plan.

There is however only so much a traffic plan can do. It may make flow less turbulent by virtue of median closures and generally reduce chaos. But in the end it can help only if the traffic is less than 1.5-2 times the design capacity of the road. At present, traffic is 3-to-5 times design capacity. Thus more capital intensive (and hence time-consuming) measures seem inevitable. Just as well is the ordinary citizen’s resolve to reject single-occupant cars and motorized or private vehicles in favour of car-pooling, public transport and bicycles.

What was the “rationale” behind this ?

This is only part of the traffic puzzle, and by no means is it a silver bullet.

What is Whitefield Rising’s role in all this?

Whitefield Rising volunteers are not paid, nor do they have the final say in any aspect of an urban project such as a traffic plan.

Whitefield Rising also encourages individuals to form local governing councils that are funded independently by member-housing-societies, so that localities can start “owning” their streets, their parks and indeed their common problems. In this way, Whitefield can improve, at least in microscopic pockets, independent of the BBMP.

But its caused a mess at some other places. Has it really worked?

Now who will work on the “mess”  in some of the areas?

Again, addressed in “What is the “essence” of the recent Traffic plan …”

I want to really help, but I am not qualified in anyway. What can I do?

Formal or academic qualifications are not much of a hurdle, but being a serious Whitefield Rising volunteer is a commitment of time and energy. It involves considerable thinking, and also much time pounding the pavements. If you think you qualify, please send email to hello@whitefieldrising.org and include the following details.