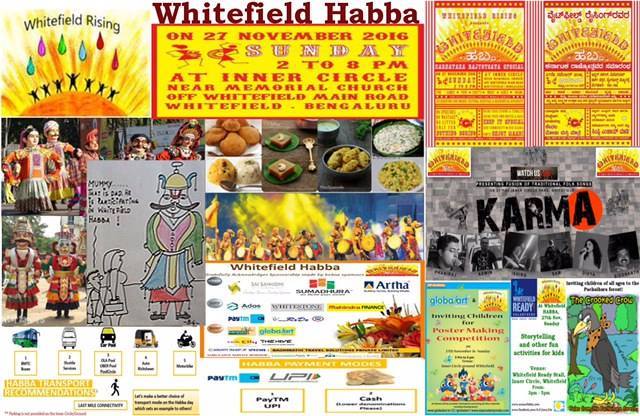 It was slightly chilly even at 4 PM when we reached the Whitefield Park grounds at Inner Circle. We’d all been anticipating today as Whitefield began its own tradition – “The Whitefield Habba” – a commemorative festival, carnival to celebrate the formation of Karnataka – or the Karnataka Rajyotsava. The spine behind this grand initiative was inevitably “Whitefield Rising” the loosely coupled but highly effective and effectual citizen group which at its heart was really nothing more than a group of citizens with really large hearts, big ambitions for humanity and highly ideal and egalitarian principles. For me it was just exciting to envision that dream unfold in the form of this Habba.

The press and PR on Social Media have been quite effective – as we entered the grounds it was evident just with the size of the crowds. At the entry were the shopping stalls, kids’ activities, volunteer outreach stalls – there was something there for everyone from organic soaps to sandige to homemade LED Christmas stars that held children and adults in thrall. Volunteers from Whitefield Rising were buzzing everywhere directing and helping organize the crowds.

At the far end the volley ball court was hosting fiercely competitive matches – Sports had begun at 2:00 PM and things were going full throttle there. Right in the middle, there were the folk dancers of Karnataka – all dressed and dolled up in blue and green and yellow – just having finished a performance on stage and reveling in that heady moment that all of us feel after getting a rousing applause – both the children and the teachers looked absolutely thrilled and happy. There was even an uriyadi in progress and water was being hosed on the human pyramid that climbed and broke the pot! Whistles and cheers of joy and success.

Right at the centre of the grounds was a huge stage – this was bigger than any I had seen in the recent times – There were Kannada folk-rock performance, preceded by a skit by the students of the Ramagondanahalli Government School on solid waste management that was really well received by the audience seated. There was adequate seating for a thousand people and the chairs were well represented. The sound system was pretty solid and carried all the voices right through. There was an original music and “Save the Lakes” performance by the students of Inventure Academy – one of the very few private schools in the Whitefield area that really seemed to take its civic responsibility seriously. I spotted Sumedha with the Ramagondanahalli school children that performed – she looked a proud parent as her wards received well deserved applauses.

There were separate shamianas erected for Sponsors and another one to sensitize the denizens of Whitefield about what Whitefield Rising was all about, the various projects and how citizens can contribute. There was an ambulance for emergencies and the around 6:00 PM the grounds were being sprayed for mosquitoes! Why the organizers seemed to have thought everything through.

The food stalls were a huge hit. From the highly eclectic and localized to the mundane and junk! Peanut milk curd-rice and sabakki bajjis competed with hot French fries and corn pakoras. It was a really “healthy” compettion as inspired home cooks gave professional chefs from Windmills Craftworks a serious run for their money. As always, food was a focal point for everyone, it could have been slightly better managed in terms of the flow of crowd and the placement of the hand-wash and drinking water points – closer to the exit from the food tent rather than all the way around.

What was great was the cleanliness, the near complete absence of plastic in the entire campus, not just the food tent and how the volunteers from WR proudly displayed their badges and served with a smile. Even the jostling and queuing up for food was so civil it was actually unbelievable.

All of the multiple items had a running theme – of civic responsibility, positive change and a can-do spirit that continually tapped into the innate goodness and altruism of us. The crowd was quite motely too – it had people from varying socio economic backgrounds – the villas and migrant slums, children from swanky public schools standing shoulder to shoulder with the children from the government schools – there really wasn’t much too choose. It was something I had not witnessed so closely in recent times. Beyond everything else that was different, the spine of the evening was one of Community – that above all and everything else, we are denizens of Whitefield – a community established more than a 100 years ago – From when  Chamaraja Wodeyar IX, gave away land to the Anglo-Indian community, furthered by the eponymous  David Emmanuel Starkenburgh White to establishing of the Sai Baba Ashram & Hospitals to the IT Boom Whitefield had witnessed it all – and changed with the changing times.

As I walked back, I wished the traffic situation could have been handled better – Why couldn’t the Inner Circle roads have been made only for walking? But Whitefield Rising had managed to pull it off – this sense of community and the feeling of belonging – it was all pervasive and hats off to the volunteers, organizers and the behind the scenes workers who expect little other than personal satisfaction from this whole process.

I had come to live in Whitefield 7 years ago – I was a reluctant resident, forced by the Bangalore traffic to stay close to work. I got sucked into the spirit of Whitefield Rising – and doing what I could, when I could – I wondered how I had become a stock Whitefielder.