Our clothes represent us, not define us 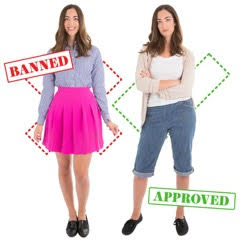 Our clothes represent us, not define us.

I like my shorts 10 inches above my knees, but other people don’t. I don’t have an issue baring my midriff, but other people do. Why is it that we have to dress the way other people want us to? It makes us regret decisions, our self esteem drops, we’ve lost respect for people we once respected most. Why? Because of the comments passed on our clothing. I’ve had enough of this judgmental society, haven’t we all?

To begin with, judging women on their clothing makes them regret their decisions. Not small decisions like choosing what to wear, but larger, life impacting decisions. A study done by SSISH in 2013 showed that almost 16% of married, Indian women regret getting married into traditional families because of the restrictions put on their clothing. Do we really need to put restrictions on women on something like their clothes after an event in their life that’s supposed to make them happier? I don’t see men being barred from wearing any type of clothing after their marriage. We’re all done regretting decisions. We believe in our decisions, other people need to too!

Secondly, when you pass comments on a woman’s dressing sense, her self esteem drops. A study done by SFSC in 2015 showed that 11% of suicides committed  by girls between the ages of 14-22 were due to insults made on their apparel. This is just one of the few studies that prove my point. 3/5 women in India feel insecure to step out alone on the streets in India (done by AHISM in 2015), 4/5 rapists first justify their actions by saying the victim was wearing “provoking” clothes (by STSKC in 2012). Why do we as a society not have an issue with this? How can these people have the nerve to blame their actions on the victim and that too on something like her attire? But most of all, what does a woman’s clothing depict about her? The fact that she has a good sense of fashion, or the fact the she’s “available”? I feel worthless sometimes, we all do!

Girls have lost respect for people who were so much to us. Every time you judge us for what we’re wearing it makes us feel as if all you see are our clothes. Are we really nothing more than what we wear? Is that all you see? Studies done by SCRIPPS in 2014 have showed that approx. 32% of women have lost relationships due to the person constantly trying to change their way of dressing. This frustrates me, it frustrates us all!

Now some people may say that wearing clothes that expose skin are “offensive” towards god and religion. If this truly is so, please tell me why a 6 inch gap between a saree and a blouse is considered “cultural”, however a 2 inch gap between a top and jeans is “shameful”. Please tell me why it’s socially acceptable for a woman to wear a lehenga is which a sheer dupatta is the only thing covering the entire midriff, but not socially acceptable if we wear a dress which has sheer panelled cutouts on the sides. Exposure of skin isn’t offensive to our culture and tradition, infact our cultural and traditional attire exposes considerable amounts of skin. Stop saying that “god” will be angry with us, it’s you, only you.

What I’m trying to tell you is you need to help us believe in our choices, we can’t feel useless anymore and most importantly, we hate destroying relations. All of this has a single root cause:

DISCRIMINATION BASED ON CLOTHING!!!