Micro-STPs are the Best Bet for Dense, Urban Environs 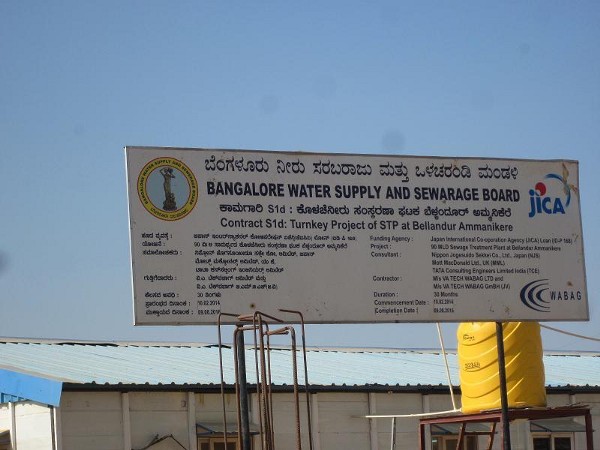 Why is Varthur Lake smelly, frothy and sometimes on fire? It is because the bathrooms of the three million or so households of Bangalore eventually discharge into Varthur Lake, mostly free of any treatment whatsoever.

To say that the government has not responded would be untrue: BWSSB has developed plans for several sewage treatment plants (STPs) — a 90 million-liters-per day (MLD) STP at Bellandur Ammanikere, a proposed one just downstream of Varthur Lake, one at Kadubeesanahalli, that treats 70 MLD. There are several more.

So once all these STPs are switched on, will Varthur Lake return to its once-bucolic beauty? Is that supposed to happen any time soon?

The picture is, well, muddied.

The STPs that are planned are expensive affairs. In the accompanying image, you can see that the cost is not mentioned, but it is stratospheric enough that the Government of Japan needs to be funding it. (A 90 MLD plant should cost not less than Rs. 200 crores in capital costs, and perhaps a tenth of that amount to annually maintain.) The STPs are also mighty complex affairs: Frequently projects of this size are hampered by land-acquisition litigation. Lastly, setting up the feedstock for each of these STPs — the lines that lead from households to the STPs — is a hugely disruptive and contentious affair. In the past year, we have seen nearly every road of Whitefield dug up to lay under-ground drainage (UGD) lines. Sometimes the way in which these UGD lines is downright appalling:

and even farcical: There have been more than a few documented instances of the BWSSB digging up a road that has just been laid by the BBMP. And, lest I forget, the c-word (corruption), present in all government projects is amply found here too; one sometimes suspects that the opportunity to make money is what drives these projects, more than the desire to serve the people.

Must we suffer all of this — planning well behind population growth, lousy execution, massive leakage of taxpayer money, a vicious disruption to citizen mobility, hard-currency loans— so that Varthur Lake, in the decades to come (and decades it will be, given government speeds-of-motion), becomes pristine again? More generally speaking, is the answer to our problems ever-more-expensive and ever-more-complicated infrastructure?

What is the wisdom in collecting sewage over a vast network of drainage pipes literally hundreds of kilometers long, and piping it all to one massive STP? What if that STP never materializes? What if it fails? How long before the pipes actually connect (some are stuck right now in rock that is too hard to cut)? How do we repay the massive, international loans needed to finance these projects?

Indeed, why should any layout at all release untreated water? After all, if everybody treated their bathroom waste-water, then no lake would ever be defiled. Herein comes to focus an obvious, yet elegant idea, the “Micro-STP”: sewage treatment plants, small ones, with a capacity of less than 50 KLD, for each and every locality, layout or village.

Already the government requires (through pollution-control norms) that apartments with 4 or more dwelling units construct and maintain their own STPs. (Until recently, the limit was 50 or more dwelling units, but the government, perhaps recognizing its own inability to provide sewerage services, reduced it to 4. Both older and newer limits are widely flouted.) Building on this idea, why not establish small, decentralized STPs that serve communities of up to a few hundred homes? Small STPs (say, of capacity less than 50 or so kilo-liters per day) need very little land, and with recently emergent technology, can be built completely underground, and furthermore can be run without electricity. There is plenty of public land available in virtually any community or layout — parks, wasteland, land under high-tension cables, school grounds, etc. — where an underground STP, that is, at zero land-acquisition cost — can be established. Let me say that again, and emphasize it: No land-acquisition cost. And that’s hardly the only benefit: Arterial roads need not be dug up, for all sewer lines would then be local, just as the STP itself. With many local, micro-STPs, sewage treatment is decentralized, and not dependent on any one massive investment to materialize and run perfectly. There is thus built-in redundancy to dencentralized operation. Gone also will be the necessity to raise massive loans; only as many STPs need be built as permitted by present finances.

The question is frequently raised of micro-STPs. Who will maintain them? Here’s an answer. Micro-STPs require significantly less annual maintenance than massive multi-MLD plants; this is because they can be constructed completely without moving parts. That is, no motors, aerators, blowers, diesel or electricity is needed. Annual de-sludging is necessary; communities that benefit from treated water must pay the small maintenance required by micro-STPs. This is why the ideal way to finance a micro-STP is for the government to pay just a seed money, and for the community (or village) — as represented for example by a resident’s welfare association — to participate in financing the micro-STP.

Micro-STPs are already being experimented with. At Kundalahalli Lake, an upstream contributor of pollution to Varthur Lake, is being planned a micro-STP that would treat sewage emanating from Kundalahalli Village. At Brookefields Layout, an RWA of about 300 homes — which goes by a charming acronym, “FoRCE,” — is about to embark on constructing their own micro-STP. Interestingly enough, both micro-STPs are privately funded: The one at Kundalahalli Lake is funded by a CSR grant by Qualcomm India, and the one at Brookefields Layout is funded by winnings from the recently concluded Neighborhood Improvement Program, which is in turn funded by United Technologies.

Where sewage would enter Kundalahalli lake, now treated water would. Where household filth would enter the Brookefields kaluve, treated water would. And when Kundalahalli Lake overflows and winds through kaluves and past various communities to finally reach Varthur Lake, all those living along those kaluves will experience a cleaner environment. Varthur Lake, the final recipient of Kundalahalli waters, and of Brookefields Layout, will become just a bit cleaner. And if all the lakes, and apartments, and villages, and layouts that fed into Varthur had their own little STPs, Varthur’s present polluted state will become history.