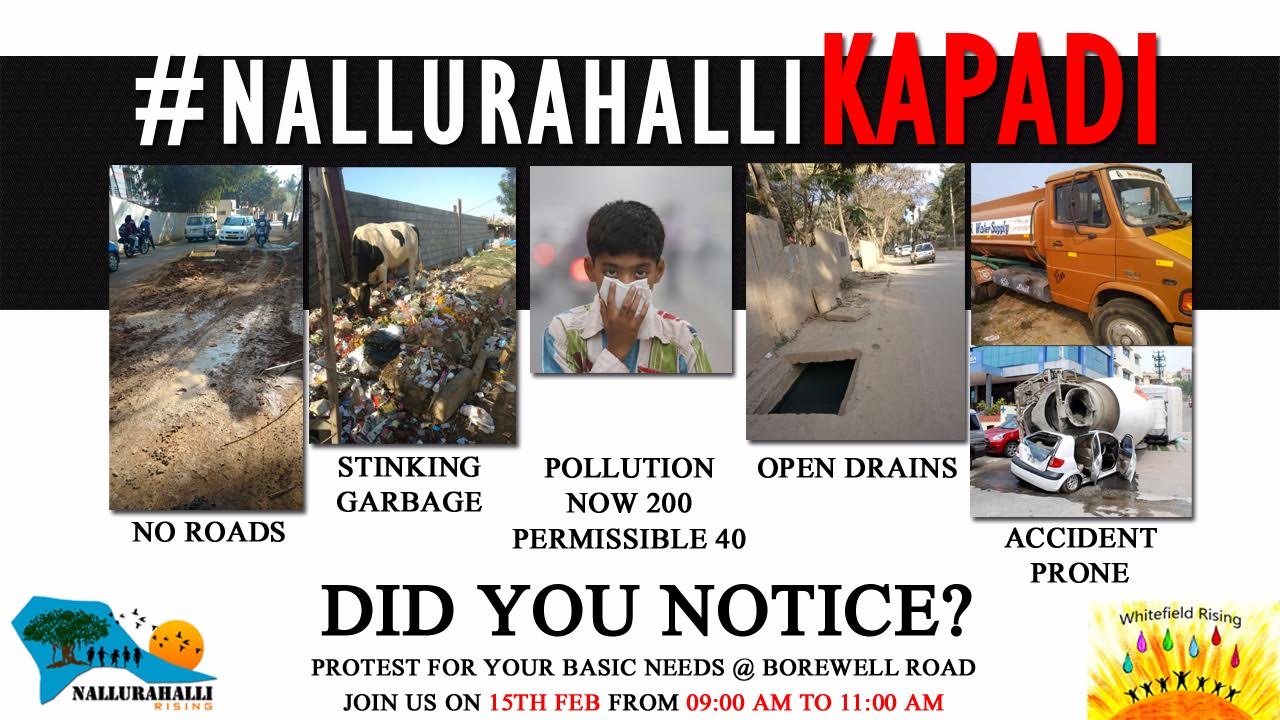 Bengaluru 15 Feb. 2017
More than 200 residents of BBMP’s Mahadevapura Zone walked peacefully this morning on Borewell Road in Whitefield, demanding restoration of the road and civic amenities. Young and old, women and men, joined hands to cover the 1.5 km stretch from Post Office to Ambedkar Statue in one hour. En route, around 200 school children and residents stood with placards in solidarity for the cause.

Organized by Nallurahalli Rising along with Whitefield Rising, the protest in Hagadur ward drew people from far and near, including Kadugudi and Garadacharpalya and Hoodi wards.

Led by a band of drummers and accompanied by a contingent of police, traffic police and traffic wardens, the protesters held placards, wore black and donned masks, symbolising the pathetic condition of one of Whitefield’s oldest roads.

Many residents stood outside their homes in support of the march. Children and teachers from many of the 14 pre-schools in the area participated by standing with banners and posters outside their premises.

Office goers took half-day leave to take part. Every day, especially since BWSSB dug up the narrow road in August 2016, commuters and residents have suffered. Those impacted include the newspaper boy and the milkman, the schoolchildren and the senior citizen. People carried their own water bottles and took them back – no litter was created.

Banners made for the event were given to ‘Joy of Work’ in Nallurhalli for recycling and upcycling. As a resident put it, “Borewell Road (and much of Whitefield) is sinking and stinking! A portion of Outer Circle caved in when an SUV passed by on Monday. This was a chance for people’s voices to be HEARD.”

Borewell Road and nearby areas:

The reasons for the protest:

Underground sewage network: BWSSB started work on installing chambers and laying pipeline in August 2016 and was supposed to complete the work by October 2016. However, despite repeated requests and follow-ups, UGD work has not been completed.