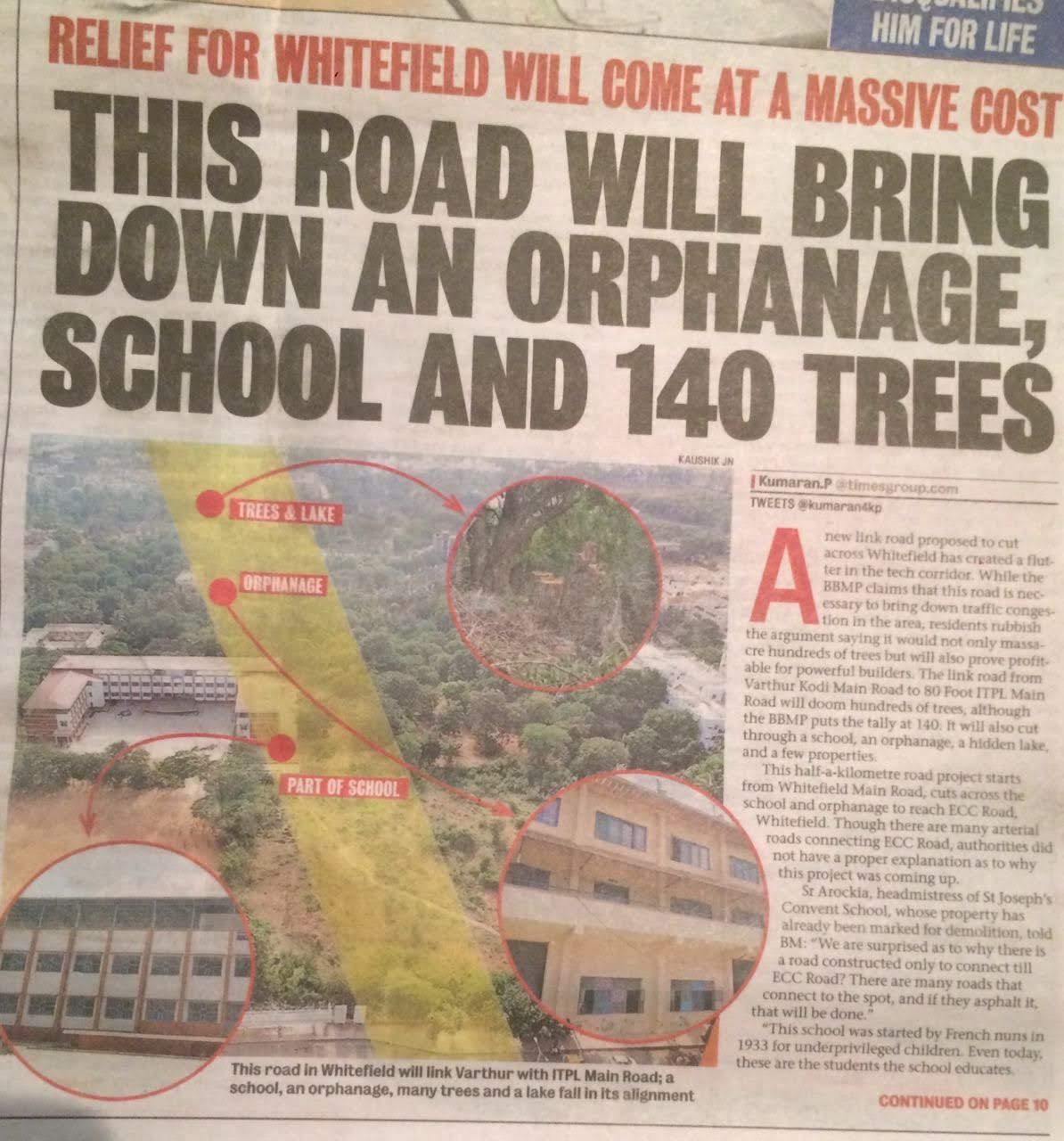 Update on the Pattandur Agrahara Lake. Reading Guideline. Read Summary and if interested, read the Addendum.

1. A claim by one HB MUNIVENKATAPPA that it was his private land
2. A new 80 feet road was notified on April 2017. It was to go from Whitefield Police Station via Holy Cross School, St Joseph’s Campus ending at GR-ECC road near Prestige Palms – with hundreds of trees felled. This would have gone along the Pattandur Agrahara Lake bank severely disturbing the lake eco system.

Many residents of the area joined together to take this issue head on and let their lake be a lake and not get converted into land use. Whitefield Rising as a platform was steadily leveraged to support all the residents. Social media, protests, petitions and media brought the issue to light. Many members from various political parties and local leaders too committed publicly to support this cause and ensure the safe keeping of Pattandur Agrahara Lake. Earlier this year, there was a request that Whitefield Rising file a PIL so as to elevate and formalize the issue for faster resolution. This was taken on though the preference has always been to have local residents fight local issues.

Whitefield Rising (WR) filed a High Court case in April (case no. WP 14818/2018) to stop BBMP from creating a new road encroaching the lake area in April 2018. This was filed for *immediate relief* on the issue as BBMP was starting work to construct a road through and around the Lake. Another PIL was filed by a citizen group from ECC road in June 2018.

Here are the final outcomes from all the citizen efforts combined including but not limited to our PIL.

PIL Filed: April 2018
Funds Raised: Rs. 90,585 (entirely through citizen contribution through this platform)
Funds Spent to date: Rs. 68,500 (invoice below in a WR tweet, we wrongly noted that this case was being taken pro bono by Ashira Law. That is not correct, and we failed to update the tweet, our apologies. Tweet now corrected)
Law Firm Retained: Ashira Law with excellent Lawyer Ms Jayna Kothari. Petitioner: Whitefield Rising Trust
Next Hearing on the cases we are watching: July 25, 2018

Addendum: For those interested in details during the case do read further.

During the course of the above High Court case, WR came to know details of a 2016 High Court verdict giving a private individual (Mr. H. B. MUNIVENKATAPPA) ownership of the Pattandur Agrahara Lake land. As we see it, Mr. H. B. MUNIVENKATAPPA seems to have some documents dating back to 1980 to stake claim to the land. The Revenue / Tahsildar / Government lawyers representing the State all seem to have worked with Mr. H. B. MUNIVENKATAPPA. We know this because the government counsel/legal team at that time never defended the claim adequately; and therefore the High Court verdict of 2016 went in favour of the private ownership of Pattandur Agrahara Lake.
In the meanwhile, a contempt case had been filed on behalf of late Mr. H. B. MUNIVENKATAPPA {as post the 2016 order of private ownership of Pattandur Agrahara Lake land in his name, the Revenue Department was yet to make the update in it records} against the State. The legal team employed by WR followed it up, and decided to make an intervention after closely following the proceedings in the High Court during April/May 2018. The contempt case is still going on and the next hearing is scheduled for July 25, 2018.

We also learnt during discussions that the Tahsildar / Government tried to appeal against the 2016 High Court order of private ownership in the Supreme Court to nullify the contempt, but it was rejected due to time bar. As such, the Government position to safeguard the Lake was on an extremely weak wicket. {Point to be noted that the government and authorities had not made any efforts to secure the Lake till now}.

Repeating the update on the State case
Case WP 26097/2018, Karnataka “State against the Land Tribunal Order”: At the July 2, 2018 hearing, the High Court put a *stay order* on the private ownership awarded to Mr. H.B. MUNIVENKATAPPA. The High Court asked:
• How the Land Tribunal could change the nature of the land from Lake Bed to private property
• And how the Land Tribunal could award private ownership to an individual when it did not have jurisdiction to do so!
This calls into question the private ownership claims of Pattandur Agrahara Lake. There was a scheduled hearing today, July 24, 2018 in the High Court. However, it has been adjourned for two weeks to allow for hand serving summons to Respondent 7.
WR and the legal team we have retained have been studying the many cases filed to save Pattandur Agrahara Lake, looking at multiple options such as Supreme Court SLP {Special Leave Petition} filing, contesting Land Tribunal Order among them.

Given the recent change in events and of Karnataka State filing a case against the Land Tribunal Order (State being the best litigant and in the best position to challenge the private ownership order and get a positive judgement) WR decided not to follow through with our plan to file the SLP in Supreme Court or a new PIL (this new PIL would have been against the Land Tribunal Order) in the High Court.