Hundreds of saplings planted around lake in Whitefield 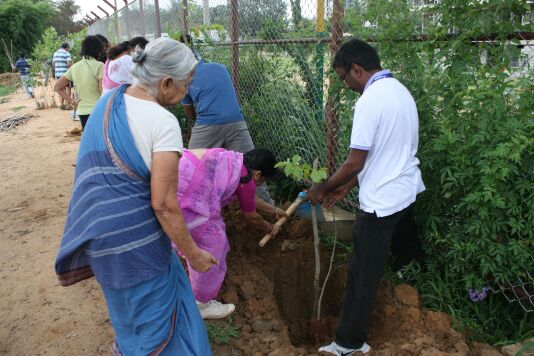 0 shares
In an effort to improve the city’s green cover, Tesco HSC, in partnership with Saytrees and Whitefield Rising, conducted an afforestation drive that saw 360 saplings planted near Sheelavanthakere Lake on June 12th 2015.
The drive saw the involvement of volunteers from Tesco HSC, Saytrees and Whitefield Rising, besides students of Inventure Academy and Nellurhalli Government School. Participants ranged from children aged 6 to adults as old as 84! Neem, Indian almond, mango, jackfruit, jacaranda, mahogany and silk cotton, were among the saplings planted.
The drive was part of Tesco’s project to plant 2,000 saplings, of which 240 were planted at WEPPIA premises in Whitefield around World Environment Day. Earlier, Tesco HSC had conducted three cleanliness drives in association with WEPPIA, Whitefield Rising and other organisations as part of the ongoing initiative to keep the neighbourhood safe, clean and green.