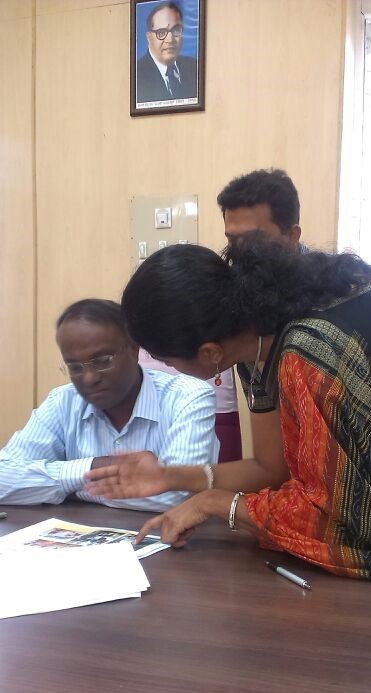 On June 13, 4 of us representing Whitefield Rising met the BBMP Commissioner Mr Laxminarayan. This was when he was right in the middle of dealing with the Mandur Crisis. So we were delighted that he actually met us and whats more, he had heard of us and even seen our work. We reiterated that we were over 2000 strong with a reach of 25,000. We were not there to complain but to collaborate and suggest solutions to our most pressing problems. Below were the key issues and his commitments.  Will he keep his word? So far his peers Mr Auradkar and Mr Pandey have both been genuine in their extension of support. We hope the same is true with this leader.  The next few weeks will tell. We will keep this space updated with the latest.

Ask 1: Our main ask and agreement was that we have an ongoing relationship with the Commissioner himself and share a monthly report with him as we do with the BESCOM MD Mr Pandey. He agreed readily and is hopeful we will be a pilot that can be an example for other wards. This way, we will prioritize and share our problems and we can collectively monitor it over the months. To start with, he will come to Whitefield and launch the much awaited Pilot of the Segregation Cart. Ask 2: Mechanized Sweeper. BBMP has already purchased it! We even brought it to Whitefield to have it demoed and took this attached picture. We understood these details before asking for it and he agreed! He wanted our Joint Commissioner Mr Devaraju to send the proposal and he would approve it. We will of course make sure to follow up on that but boy, do our roads need it, especially because of the construction! When viewing the demo, it appeared this would pick up anything and everything, maybe even a passerby if you arent careful! 🙂 So we are indeed looking forward to this really working out for us. Ask 3: BBMP to follow its own mandate! These autos are supposed to pick up only segregated garbage. For that, they are to have bins inside the cart. They dont and nor do they bother to pick up segregated garbage. This only leads us back to the endless cycle of garbage. They are supposed to “fine” you if you dont segregate :). So we requested that we be fined and these bins be provided. He suggested we donate these bins but he would issue more fine books to all his people who could then impose these fines. (Sorry residents, but this is in our collective good). Ask 4:  OFC Nightmare. The Optical Fibre Cabling companies have run amok in Whitefield. This activity is managed centrally and orders to dig come from there (rather than from our local Zonal office). While we need these companies, the way they go about their business is apalling.
We congratulated the Commissioner and his team on negotiating a good OFC contract and presented him with a copy of their own contract with VODAFONE – then we proceeded to bring to his attention that his Ward engineering team was failing in their duty to enforce  and brought it to his attention that various critical clauses of the contract – example complete violation of all safety requirements – where are the safety signs, barricades, flashing lights a polite “Sorry for the inconvenience”, etc. Failures to restore pavements (Reliance) or roads (Vodafone and Airtel) – while he kept promising  enforcement we made it clear that backfilling of pits or seizing their equipment was not an acceptable level of enforcement – WE wanted forfeiture of their security deposits by BBMP to restore our roads and footpaths immediately forthwith – he promised to instruct restoration in one week or dire consequences. Ask 5: Road Signs: Our signages are apalling and we need better signs. He agreed readily and said, submit your proposal and I will approve immediately! Ok! Ask #6: Budget!  One of our wards was allocated Rs 30 lacs in 2013-14 – We showed  him that Whitefield is the highest contributor of revenue to the State and in return we were had a rank of  191  in living quality index and 119th in budget allocation out of 198 (lowest of the low) , he informed us that they had already increased the “WARD ALLOCATION” for us as NEW wards to Rs 4 crore per ward – Since greater Whitefield consists of 4 wards it means Rs 16 crores combined for our areas.

So whats the catch ? Evidently these works are to be recommended by your CORPORATOR – so folks get your projects lined up in your ward and appraisals out and get cracking with your CORPORATOR (do you even know who he is ? Time to find out and get in front of him ) – they are up for election next year so now is the time for us to hit the ground running. Confront these people, get them to be transparent in how they are using these funds, monitor the projects and dont let them get away. The best way to fight corruption is to become an informed and vigilant citizenry.

The overriding comment we have to them is to ENFORCE ENFORCE ENFORC E – whether it is segregation, OFC or Posters defacing street signs. This means they have to work – since we are watching.

We also discussed complete failure of ward engineering to deliver even the most basic work at street level – HE tried to tell us to tell JC – but we had been there done that so we knew all the tricks that this involved and we finally convinced him when for every solution we told him “We already did that but it doesnt work” – he finally gave in and promised that if we gave him a list he would instruct the engineers personally with an order to get the job done. – So now its up to us to get that list of pesky footpath breaks and small repairs that are never done and give him a finite list with specific locations – volunteers wanted. Write to streets@whitefieldrising.org