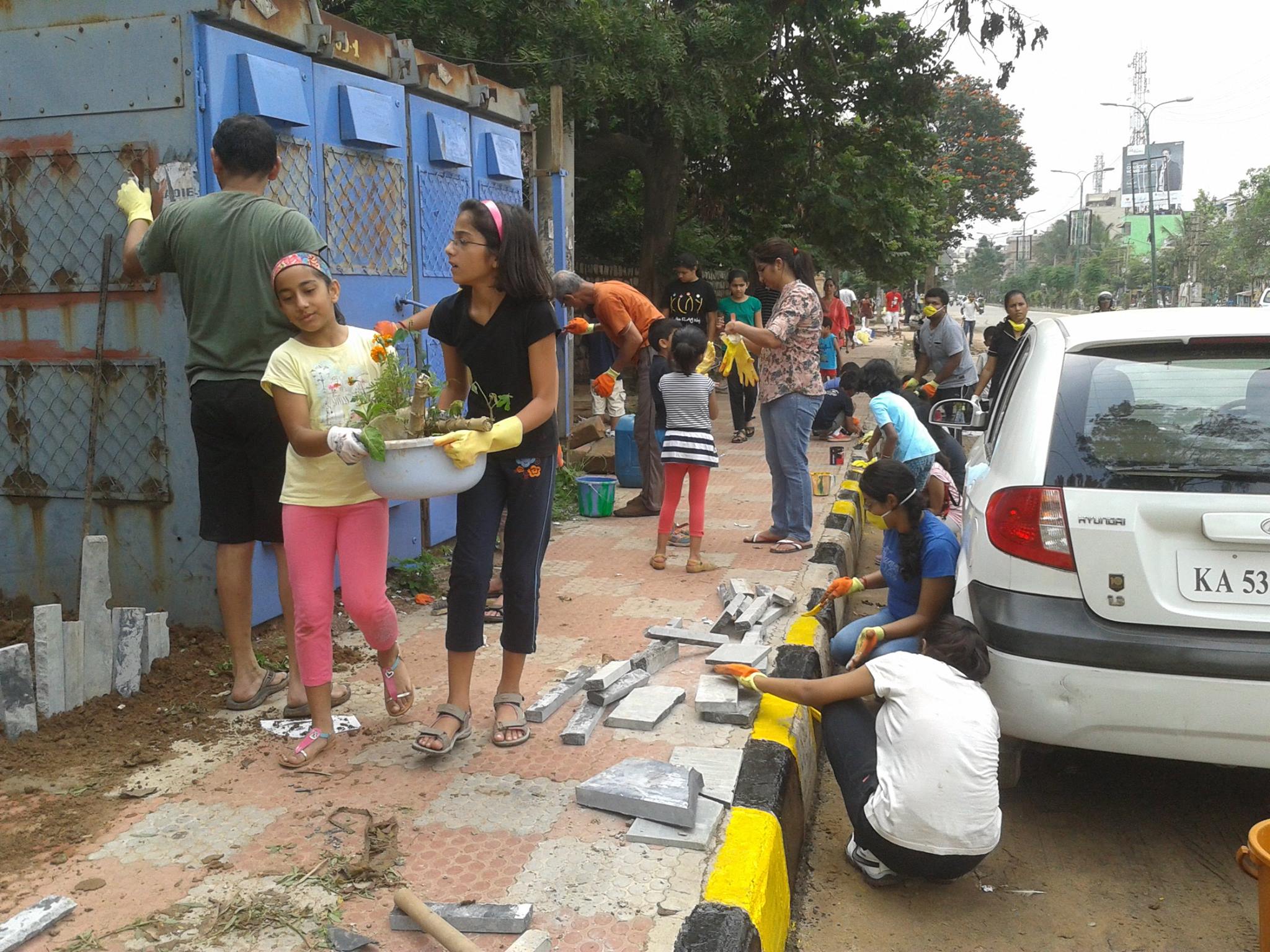 This spot fix was initially planned sometime in August, announced in September, cancelled and then finally happened as two Stretch fixes in the 2nd and 3rd week of October :).

Click here for a photo journal that provides an idea of how it worked out.

Issues with the Stretch:

So, ‘Come September’ – 2014, Anu Govind (ward committee member and a resident of BEML layout) got us connected with BBMP SWM contractors who helped remove much of the debris behind a couple of Electricity Panels. Then for the stretch is 250m in length, the rest of the work was done in 2 installments:

Area around the Electricity Panels:

The hope is that urinators will find it hard/impossible to get behind the panels.

Holes in the Footpath (close to Tata Motors service center):

The first one was right next to the Tata Motors gate. Notice also the debris next to the wall in the far end of the first pic in the below set. That part was cleared out by some really dedicated spot fixes and took a good hour to do. The hole in the path was fixed with the help of a JCB brought into service with the request of folks from Akme Encore.

This second hole was a bigger one and needed two slabs to be placed. One was put in place with the help of the same JCB. The second one was put in place during the lunch hour of a creative garden staff from the near-by Sterling Brookside. Some more pics of that effort and a video of how that was done are below.

How the Second Slab was Placed ?

Here is a link to the Video that shows how the second slab was placed !!

The planting channels were previously filled with litter. Leaf litter was fine but the litter of the dry waste kind had to go. The empty pot you see in the second pic in the below set has been dug in and placed to hold water that would ideally seep through the hole in the pot. About 30 of these have been placed on the entire stretch and the hope is that this would water the near-by plants over a period of time, conserving water and energy needed to water the area.

Overall, the effort was a great learning. It was great to see many kids and elders taking part. Eat Your Street was fulfilling and also included things such as learning about the weeds that we can eat. Painting gave a free and guided hand to kids and adults. Graffiti (done with support from SAP and its employees) was fun to see it emerge and then fill it in.

One great thing that happened was that, the tools purchased with funding from Rotary were immediately used by another group for their own spot fix.

There are many more possibilities for this stretch. Please connect with the team if you would like to take a lead to do any of the following:

Connect with others in the Area:

2 thoughts on “Clean and Eat Your Street, Kundalahalli Colony”